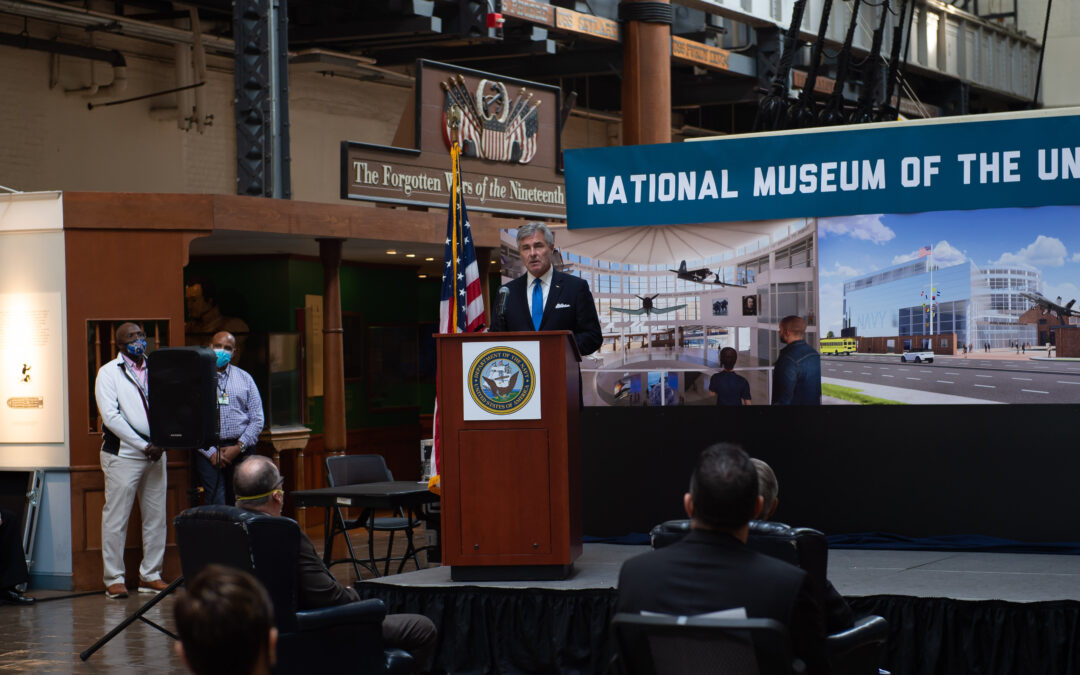 Secretary of the Navy (SECNAV) Kenneth J. Braithwaite announced today at the Washington Navy Yard that the U.S. Navy intends to build a new National Museum of the U.S. Navy (NMUSN).

“It is vital that the American people understand the importance of a strong and viable naval force. As a Maritime Nation, our future depends on it,” said Braithwaite.

“On behalf of the United States Navy, and with deepest gratitude to every one of our great partners, it is my honor to announce plans for a new campus for the National Museum of the United States Navy. The new museum campus will serve as an educational, inspirational, cultural and ceremonial center for those who have served, and are serving in the Navy today. The exhibits in this advanced museum will demonstrate the critical role the Navy has played in the defense of our Nation.”

On the Navy’s 245th birthday, NHHC Director, retired Rear Adm. Samuel Cox remarked on the importance of celebrating Navy’s service and the tangible tribute to the service and sacrifice of our Sailors.

“Naval History and Heritage Command’s mission of preserving and presenting an accurate history of the U.S. Navy to the American public is essential to honoring those who have served and are serving the Navy today,” said Cox.

The current NMUSN, which falls under Naval History and Heritage Command (NHHC), is located inside the Washington Navy Yard. The ideal site for the new Navy museum is in the vicinity of the historic Washington Navy Yard, but the final location is not yet finalized. The new NMUSN campus will give the public unfettered access to U.S. Navy history and heritage.

NHHC will serve as the Navy’s lead for coordinating the building of the new museum. The museum  will be an advanced, campus design that will  bring to life the human experiences of serving in the U.S. Navy, deliver leading-edge engagement to amplify Navy priorities and operations, showcase the history and heritage of all Navy communities, and create a memorial to our heritage and the service and sacrifice of American Sailors.

While unable to attend in-person, Master Chief Petty Officer of the U.S. Navy, Russell Smith, provided video remarks. “Giving the public better accessibility allows us to share a deeper understanding of our rich history and heritage with the American people,” said Smith. “This is important, because our history is America’s history.”

To raise funds for the new museum, the Navy plans to partner with a registered 501(c)(3) organization that seeks to preserve, commemorate, and share the history of the U.S. Navy. The total estimated funds required for the construction of the state-of-the-art facility is $204M for phase one of the project with opportunities for spiral development of additional phases totaling $450M.

Naval History and Heritage Command, located at the Washington Navy Yard, is responsible for the preservation, analysis, and dissemination of U.S. naval history and heritage. It provides the knowledge foundation for the Navy by maintaining historically relevant resources and products that reflect the Navy’s unique and enduring contributions through our nation’s history, and supports the fleet by assisting with and delivering professional research, analysis, and interpretive services. NHHC is composed of many activities including the Navy Department Library, the Navy Operational Archives, the Navy art and artifact collections, underwater archeology, Navy histories, ten museums, USS Constitution repair facility and the historic ship Nautilus.