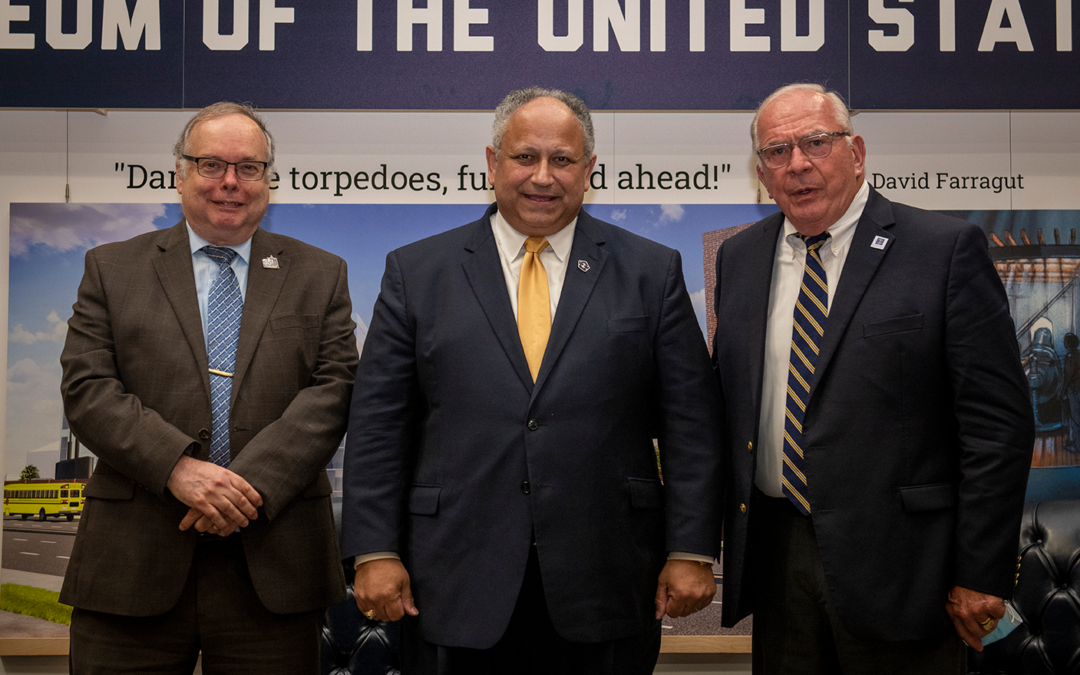 WASHINGTON NAVY YARD – Secretary of the Navy (SECNAV) Carlos Del Toro announced Wednesday, Oct. 13, 2012 that the U.S. Navy has acknowledged the kind offer from the Navy Museum Development Foundation (NMDF) to lead a national campaign to raise funds for the future National Museum of the U.S. Navy (NMUSN).

The announcement came during an event at the current museum marking the U.S. Navy’s 246th birthday.

The current NMUSN, which falls under Naval History and Heritage Command (NHHC), is located inside the Washington Navy Yard and attracts 100,000 visitors per year. The new NMUSN will be a campus-style museum outside the Navy’s security perimeter, potentially increasing attendance to upwards of 1-2 million visitors annually.

“The new, state-of-the-art flagship museum will ensure that the Navy’s story can be shared with the audience it deserves. Moving the museum to a more accessible site within the heart of the nation’s capital presents a unique opportunity to reach the 40 million visitors who come to Washington DC every year,” said NMDF Board President, retired Vice Adm. Al Konetzni. “This includes millions of students eager to be engaged, educated, and encouraged. The Navy will be the only service with a museum capable of reaching that audience. The location provides an incomparable stage for telling the Navy’s story, creating a memorable and compelling experience for visitors, and using the Navy’s legacy to inspire future generations.”

“One of our goals with the new museum is to build public understanding of the Navy’s rich history and proud heritage with the public,” said NHHC Director, retired Rear Adm. Samuel Cox. “Among other things, we hope the museum shares the human experience of serving in the Navy and creates a memorial to the service and sacrifice of the American Sailor.”
With plans to open the new museum in October 2025, the Navy estimates funds required to construct the state-of-the-art facility is $204 million for phase one of the project with opportunities for spiral development of additional phases totaling $450 million.

Naval History and Heritage Command, located at the Washington Navy Yard, is responsible for the preservation, analysis, and dissemination of U.S. naval history and heritage. It provides the knowledge foundation for the Navy by maintaining historically relevant resources and products that reflect the Navy’s unique and enduring contributions through our nation’s history, and supports the fleet by assisting with and delivering professional research, analysis, and interpretive services. NHHC is composed of many activities including the Navy Department Library, the Navy Operational Archives, the Navy art and artifact collections, underwater archeology, Navy histories, ten museums, USS Constitution repair facility and the historic ship Nautilus.

As part of an extended Navy campus, it will provide a home for naval ceremonies and functions to celebrate historic anniversaries and individual achievements. As a center for inspired storytelling, it will become an internationally recognized forum for innovative thought leadership, education, and training.

“It is vital that the American people understand the importance of a strong and viable naval force. As a maritime nation, our future depends on it,” said former Secretary of the Navy, Kenneth J. Braithwaite. Secretary Braithwaite is joined by Secretaries England, Dalton and Maybus as Honorary Campaign Co-Chairs.

The new museum will also become the cornerstone of a Navy Campus based on a sustainable business model designed for long-term durability of the project. In addition to freeing up critically needed space at Washington Navy Yard, the mixed-use Campus will create opportunities for vitally needed revenue streams through expansive retail operations to support museum programs. The site will include the U.S. Navy’s primary conference center capable of hosting a wide range of lectures, courses, seminars, and meetings. It will also include special event facilities for ceremonies and celebrations.

Old and new generations of the sea service, as well as the general public, will find their experience at the Campus to be educational, relevant, inspirational, and compelling. The Navy’s storied past, present and future is a story for everyone, and one that should be told.