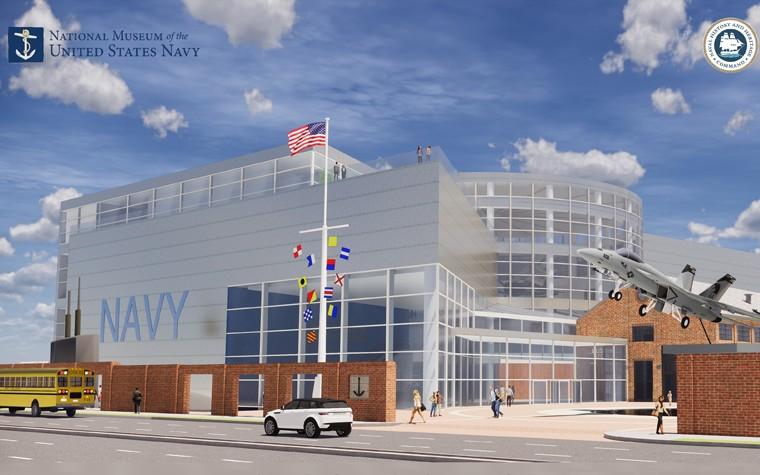 This is part one in a series that will talk about all of our U.S. Navy, and over the next several weeks we’ll share more detail on every location. The New Navy Museum Campus concept will allow for a hub of activity.

National Museum of the U.S. Navy

A free museum, devoted to the display of naval artifacts, models, documents and fine art, the National Museum of the United States Navy chronicles the history of the United States Navy from the American Revolution to the present conflicts. Interactive exhibits commemorate our Navy’s wartime heroes and battles as well as peacetime contributions in exploration, diplomacy, navigation and humanitarian service.

The National Naval Aviation Museum is the world’s largest of its kind, and one of the most-visited museums in the state of Florida. The Museum captures Naval Aviation’s heritage and brings its story of challenge, ingenuity and courage to its visitors. Enjoy free guided tours and retrace the NC-4’s first flight across the Atlantic or fly in one of the museum’s full motion simulators. Detailing the human side of Naval Aviation and featuring memorabilia from each era of fighting, including personal mementos from historic battles, flight logs, vintage equipment, and flight clothing, the museum continues to educate visitors about Naval Aviation.

National Museum of the American Sailor

As an official Department of the Navy Museum under the Naval History and Heritage Command, the National Museum of the American Sailor’s mission is to collect, preserve, and interpret the history of the United States Navy’s Enlisted Sailor for the benefit of the US. Navy and the people of the United States.

The Hampton Roads Naval Museum is an official U.S. Navy Museum, which interprets the history of the U.S. Navy in and around Hampton Roads, Virginia from the Revolutionary War to the present day for servicemembers and the general public.

Established in 1947, the U.S. Navy Seabee Museum is the second oldest official Navy museum in the nation. The Seabee Museum is a federal museum and is operated by the Naval History and Heritage Command.

The Submarine Force Museum is home to the Nautilus, the world’s first nuclear powered vessel. Located on the Thames River in Groton, Connecticut.

The U.S. Naval Undersea Museum is the only official Navy museum that interprets all of the Navy’s undersea activities. We hold the country’s most comprehensive collection of U.S. Navy artifacts, documents, and reference material related to undersea subjects, and are renowned for several of these specialty collections, especially those in torpedoes, mines, diving and salvage, submarine technology, and unmanned underwater vehicles (UUVs). Several of these significant artifacts are on display in the museum’s 18,000 square feet exhibition hall, designed to connect visitors to the history of the underwater Navy.

The Puget Sound Navy Museum is one of ten museums funded and administered by the U.S. Navy. With the Naval Undersea Museum (NUM) in Keyport, WA, it forms Navy Museums Northwest (NMNW). NMNW is a unit of the Naval History and Heritage Command with headquarters in Washington, D.C.

Located in historic Founders Hall, the historic Naval War College Museum serves to educate the U.S. Naval War College (NWC) community, as the corporate memory of the U.S. Navy in the region, and as a clearinghouse for naval history information in New England. The Museum Director, a subjects-area specialist, and staff answer inquiries, provide guidance and orientation talks to visitors on regional naval history and current exhibits, and assist scholarly researchers in the use of the Museum holdings.