The Navy’s Role in the Popularity of Baseball 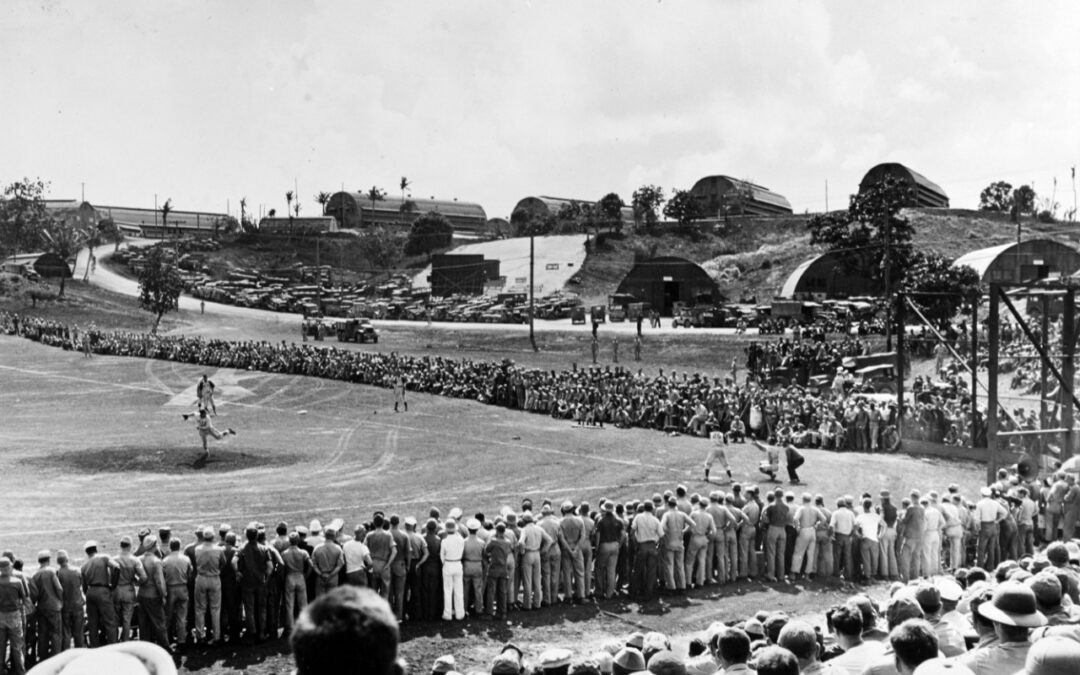 Article from the Naval History and Heritage Command.

As the weather gets warmer and fans return to the ballpark this month, there is always hope that this year could be the year your team takes home the World Series trophy. The crack of the bat. The green grass. Vendors selling their snacks and libations. Singing during the seventh-inning stretch. Nothing could be more classically American than baseball. In the nearly two centuries since baseball was created in America, the sport has expanded into a massively popular game that draws talent from all over the world. A lot of that growth is thanks to the U.S. Navy. As Sailors traveled the world, so did the sport. Navy ships were known to visit Japanese ports and play against local teams as early as the 1870s. Sailors have also been credited with introducing the sport to places such as China, the Caribbean, Hawaii, Nicaragua, and the Philippines. By the beginning of the 20th century, baseball had become integral to training Sailors. It provided physical training, and it also boosted morale and productivity.

The U.S. entry into World War I brought an influx of collegiate and professional players into the military. When not performing wartime duties, some ships found time to play the game in foreign ports. In fact, Navy baseball had become so popular that installations and ships formed several teams that competed in their own leagues. In southeast Asia in 1916, teams from ships stationed from the Philippines to Shanghai gathered for a championship series that drew a crowd of more than 30,000. Many of the natives from the foreign countries watched Sailors play and picked the game up that way. More than 440 major and minor league players served during World War I.

When World War II broke out, professional players were not exempt from the service. However, not all the service branches were onboard with organized athletics during the war. For example, the Army curtailed sports, so many of the nation’s top players joined the Navy and Marine Corps. More than 500 Major League Baseball players and thousands of minor leaguers joined, including the likes of Bob Feller (a chief petty officer and gun captain), Ted Williams (a naval aviator in both World War II and the Korean War), and Yogi Berra (a gunner’s mate and participant in the D-Day landings). Whether they volunteered or not, many of them played in exhibition games throughout the war to boost morale, raise funds, and unify the troops. “During the greatest conflict in the history of the United States, baseball was there to provide both a distraction and a uniter,” said NHHC historian Gordon Calhoun. “America’s game went to war and sacrificed along with everybody else.” Sailors played whenever they could as well, whether a suitable diamond was available or not. Games were often played at sea on the decks of aircraft carriers.

After the war, things changed a bit, and baseball wasn’t as prevalent in the service. A few professional players served in the Army and the reserves during the Korean and Vietnam Wars, including Brooklyn Dodgers pitcher Don Newcombe and New York Mets pitcher Nolan Ryan. Others built careers after their service. Al Bumbry, who served as a platoon leader in Vietnam and earned a Bronze Star with “V” device, was a standout center fielder for the Baltimore Orioles that captured the 1983 World Series title.

Although service members can no longer serve and play professional baseball at the same time, baseball continues to be an important pastime for those serving overseas and here at home. From the battlefields of Iraq and Afghanistan to shore installations, Sailors still enjoy the friendly competition of the sport. Over the course of the years, baseball has went from “national recreation” to a globally cherished sport, and the world can thank the U.S. Navy for that.